Erica Parker was featured in Tecin Rebel Magazine for its March 2008 issue. 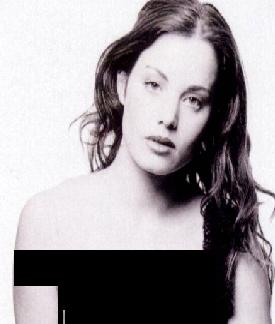 The aspiring actress has posed for stunning shots of the magazine with topless shots, which you could see here. She also posed for other classy magazine like Maxim.

The magazine indicated, “Erica Parker: Zombie Bait. This temptress is really too darned nice to be killed by zombies… Erica parker recently played Lance Henriksen’s daughter in the supernatural tale the Untold, but in House of Dead, she’s a zombie bait: one of the very first victims of the undead creatures of malevolent Isla del Morte.”

Erica Parker explained, “I play Joana, a friend of Cynthia’s (played by Sonya Slaomaa). And I end up going to this island where a big rave is going on. I am having fun with my boyfriend and we go out on the beach to fool around, and then I go skinny-dipping but he’s just too wimp to join me. In the water, I feel some stuff in my legs, and you think it’s just going to be just like the opening scene of Jaws… but it instead, it’s the guy on the beach who vanishes. And inside I find him being killed by the zombies”

On reaction to baring skin during the frigid Vancouver shoot, she said, “It was so cold that every time I came out of the water, I’d run for a hot tub they’d set up just for me.”

On playing sacrificial lamb that did not involve a lot of in-depth research into her character’s past, she admitted that she did try to give Joanna a little depth, saying, I always do a bit of background work. I had the idea that I should keep this simple; that she was talking about her friends who would be the girls who show up later in the film, and that was my connection to everything. Most of the personality in this was just me, even though I’m not someone who actually goes to raves, so I had to kind of imagine that part of it. I think she’s a little bit lighter than I am; I don’t think she’s dumb.”

On baring herself for the camera, she revealed that it was actually less taxing emotionally than some of her other acting assignments, saying, “It was difficult because it is something I haven’t done before but I’ve found that getting to other places emotionally in other projects has been harder.”

Aside from she’s dabbled in modeling, Erica Parker is looking to keep her acting career moving forward. She added, “I’m learning but I’m not there yet; you really have to learn to let yourself go.”