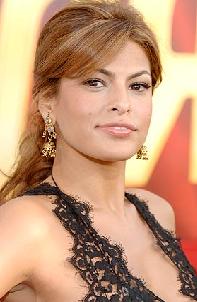 The Cuban actress, who starred alongside Johnny in “Once Upon a Time in Mexico” in 2003, was petrified about locking lips with the handsome actor because she had a huge crush on him.

The 33-year-old stunning actress revealed, “All of my screen kisses were the best, though I regret not kissing Johnny Depp for longer. I was so intimidated by him. It was the first time I had worked with an actor who I had crushed on as a little girl.”

Eva Mendes also revealed she was desperate to star opposite Brad Pitt in “Mr. and Mrs. Smith” and was furious when she lost out to Angelina Jolie, saying,”I really wanted “Mr. and Mrs. Smith”. I was 10 minutes away from auditioning when my agent left me a message telling me the part had been offered to Angelina Jolie. I got really crazy, ignored it and auditioned anyway. I really thought I had a chance!”