The night before the world paid tribute to Michael Jackson, close family members viewed the entertainer’s body in an open casket at Forest Lawn in the Hollywood Hills. 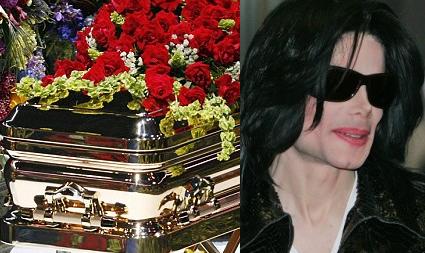 Relatives gathered around the casket, “talked to each other and cried” during the viewing on Monday night, Fossett revealed. Jackson’s parents, Katherine and Joe Jackson, were not among those gathered, but after the viewing, mourners went back to the Jackson home in Encino.

“It was a somber mood,” Fossett says. “Even though he’s this big entertainer, he’s still our family.”

But there was some levity as well as relatives reminisced. Fossett said he recalled for the group when Jackson, family and friends descended on Disneyland for the grand opening of the Captain EO movie, which starred Jackson. He also talked about the time in 1972 when Michael and the rest of Jackson 5 returned to Gary to perform at West Side High School.

Fossett and others stayed the night. Tuesday morning, the family had a quick breakfast and then got into their vehicles for the convoy to the 30- to 40-minute private service. About 70 relatives gathered at Forest Lawn, where Jackson’s cousin Wendell Hawkins conducted a Jehovah’s Witness service, according to Fossett and another cousin, Myron Hawkins, who is Wendell Hawkins’ brother.

Fossett, who is not a Jehovah’s Witness, describes the service as “spoken in a way that their belief is that he [God] is going to be back on this earth.” Wendell Hawkins “addressed guests and said he was glad that his [Michael’s] life was connected with Jehovah.” During the service, John 3:16 was read, the Biblical passage that speaks to God so loving the world that he gave his only son, and Ecclesiastes 9:5, which refers to the living knowing they will die, but the dead being conscious of nothing.

During the private service, Jackson’s elaborate, gold casket was closed, with a spray of flowers on top, the same ones as seen at the public memorial service at the Staples Center.

Meanwhile, there are rumors that Michael Jackson’s body is being taken to Neverland Ranch near Santa Barbara.

While no announcement has been made about burial plans, there is SOMETHING going on. The family MUST have something special planned otherwise why would they have waited so long to bury MJ, right? Could it be they’ve finally gotten the approval to lay him to rest at Neverland?

Another possibility is that Jackson will be cremated and his ashes either stored or spread at Neverland. That would avoid the need to get a permit for burial.