January 22 will be the anniversary of Heath Ledger’s passing. A year after his death, the late actor’s closest friends open up to Entertainment Weekly about his last days. 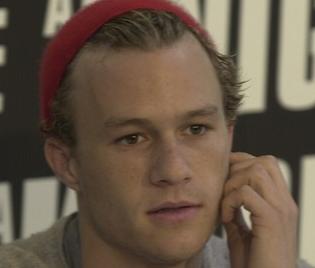 Actor Wes Bentley, one of Heath’s closest friends, revealed: “I haven’t talked about it until now. I’m really nervous. Heath’s fun clouded its way through a room.”

Wes Bentley continued: “It was infectious …Some people think he’d party too much and take drugs.” And he defends Heath, saying, “That wasn’t the case. It was young energy. He was high off life.”

The “10 Things I Hate About You” beauty added: “I got the sense he was averse to becoming any kind of teen idol. I think he felt like 10 Things had more substance, but he anticipated that if he did more movies like this, he’d get stuck doing teen romantic comedies.”

Other celebrities offer new insight into his sad final days:

Catherine Hardwicke, director of Twilight: The pressures he was under, with his family, his daughter, everything, would stress out any yogi. Buddha would be stressed. You’re being buffeted and pulled and tempted and flown across the ocean back and forth — how does anybody survive that? Obviously a lot of people don’t.

Terry Gilliam, director, The Brothers Grimm: All of us who were close to Heath knew what was going on, and it was not the most pleasant experience…. He was obsessed with his daughter. She became the center of his thoughts. He would drag her up to my house in London. Here’s Heath, Academy Award nominee, and he’d just grab his daughter, stick her in a backpack, hop on the Tube, and come up to the house. Nobody would have thought, There’s Heath Ledger. He was just a guy with a kid.

Nicola Pecorini, friend and cinematographer, The Order and Imaginarium of Doctor Parnassus: Separation when there is a kid involved is always very painful, no matter what. And Heath was always very hard on himself. His tendency was always to say, ”What did I do wrong?” He was really bleeding. And I’m pretty sure that all his sleeping problems had nothing to do with work and all to do with Matilda and Michelle.

Gary Oldman, costar in The Dark Knight: Most of the conversations we had were about family. I think because I had been through being a single dad in the past, he was picking my brain a little. The last time I saw him, he said he was looking forward to spending some time with Matilda.

Gilliam: The insomnia was really getting to him. He’d arrive in the morning looking really shattered. I’d say, ”Let’s take it easy because you’re knackered.” And he’d say, ”No, let’s go.” And he’d just whip the thing up into another gear very quickly and off we’d go. By the end of the day he was transformed into this beaming, angelic presence. The work just lifted him every day. He couldn’t get enough of it.

Pecorini: I’m convinced Heath caught pneumonia at the end of that year. I remember I forced him to see a doctor, even though he didn’t want to. The doctor said, ”Yes, you have the beginning of pneumonia. You’d better get antibiotics and go home and sleep.” He got the antibiotics, but he refused to go home and sleep. And that very night, he delivered one of his best performances I have ever seen him deliver. He went on nerves, mainly.