Gene talked to AOL TV about his disdain for marriage, why he could take anyone’s girl and how Adam Lambert may have already killed his post-‘American Idol’ career. 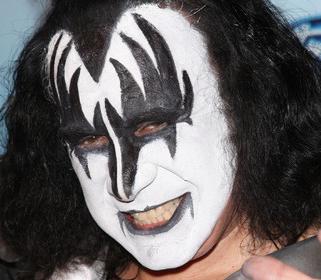 Now that Nick’s off at college, might he get his own reality show?
I don’t think he’s interested, actually. He was just offered a motion picture, but it doesn’t really appeal to him. He’s got his graphic novel, called ‘Incarnate,’ so he’s more about drawing and writing, and he’s got music too. If the right movie comes along he’ll do that. Likewise for Sophie. But the only job Sophie and Nick have is to do well in school and be charming young adults. That’s it. That’s their job.

How has your notorious experience with women influenced the way you’ve raised Sophie?
I hope the only lesson she ever learned from Dad, or the main one, is that women are trapped and you’ll never get out of that unless you stop defining yourself by men. Women get married, they take the guy’s last name. If you read all of those really stupid, idiotic women’s magazines, all of them talk about how to stay eternally youthful. But the worst part of it is, “10 Ways to Keep Him Interested” or “10 Things He Likes to Eat.” “What Is He Thinking?” “Where Is This Going?” All that stuff is the ruin of women, and Sophie understands that. Sophie has boyfriends, but she’s nobody’s girlfriend. Women are free. You are no longer indentured slaves. You can get married if you want to, and if you don’t want to, that’s OK too.

Speaking of marriage, you’re really never going to marry Shannon, are you?
I’m never going to marry anybody. It’s an archaic institution; it doesn’t work. If you take a look at it strictly as a business, forget the emotions and the love, it’s a failure. The statistics are horrifying. It’s a financial model that doesn’t work. You need a cohabitation agreement with individual counsel, so you two decide what the relationship should be, not the government. And if you don’t do that, then when you get divorced, because statistics tell us you will, then somebody other than the mother who gave you life is going to take 50% of your gross pre-tax dollars plus the car, the jewelry, the clothing and the houses. Anybody I’ve lived with I’ve had a cohabitation agreement with, and I’ve lived with Cher and Diana Ross. And I would urge everybody to do that, especially since women find men with money to be appealing. Whereas we don’t care if you have a dime.

Do you mind if women are interested in you just because of your wealth and status?
Well, you just have to understand where the minefield is. I’m aware that if I didn’t earn a lot of money and have a certain stature then I’m less appealing to women. Period. Shannon included. Tell me if this is true: Two guys are talking, two girls are talking. The guy says to his friend, “I’ve got a blind date for you.” The friend replies, “What does she look like?” Two girls are talking: “I’ve got a blind date for you.” “Really? What does he do?” A guy pulls up in a Volkswagen from the 1960s and says, “Let’s go on a date and eat beans and franks.” Next day, same guy pulls up in a Rolls Royce and says, “I’m taking you to Paris” — which one do you want? But men don’t care if you have a job, a dime or a car. We just don’t care as long as you look good.

So would you find it intimidating if a woman was more successful than you?
No. But a lot of men do. I’m delusional though. I think I’m God’s gift. I’m the man all women dream of. I know I’m not the best looking guy in the world, or the worst looking guy. I have average looks. But I know I can walk into a party and take anybody’s girl.

Adam Lambert’s performance with Kiss on ‘American Idol’ was amazing. But I’m a little bummed you’ve been talking smack about him …
I don’t think I’ve been talking smack at all. In fact, if anything, I’ve been soft-peddling. He’s enormously talented, best talent ‘American Idol’ has had, but I think he killed his career because now the conversation is not about his talent but about his sexual preference. He’s done. You’re forcing people to deal with issues they may not be interested in. Life is unfair, and the masses don’t all live in L.A. They live in Wisconsin and Nebraska, and you’re on crack if you think the same rules apply there. My advice is still the same, shut the f*** up, just sing and let people say whatever they want. But I do wish him the best because he’s got all the talent in the world. If only the world was not homophobic, but it is. I would be the first one to vote for equal rights for gay women and men, and get the church and the state to stop telling everybody how to lead their lives, but do I think he’s killed his career? Oh, in an instant. I hope I’m completely wrong. I hope he becomes the next Beatles and proves me wrong.