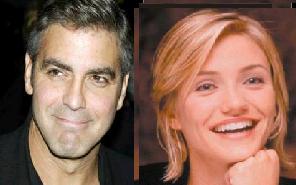 Forbes revealed, “George is not only a heartthrob but an Academy Award and Golden Globe winner, and when not in Los Angeles, he is sometimes found at his luxury home at Lake Como, Italy. Cameron has the looks and the money. She is a former model and one of the few female film stars who can command as much as $20 million a picture.”

In the past, George was voted People’s Sexiest Man Alive and Cameron, who also appeared in the Empire film magazine’s 100 Sexiest Stars in Film History, has featured regularly in People’s 50 Most Beautiful People.