Giselle Bundchen was spotted spending Monday by the poolside with her boyfriend at the Setai Hotel in Miami Beach. 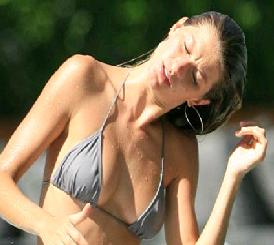 Brazilian supermodel with boyfriend Tom Brady enjoyed a lunch on their loungers.

The 27-year-old supermodel wore a bikini with a sliding triangle top that ties at neck and back and a low rise bottom with moderate cover.

Her boyfriend Tom was in town playing for the New England Patriots who won their game 49-28 Sunday, October 22.

She is considered the most successful supermodel in the world and she made $33 million in 2006, adding to her estimated $150 million fortune according to Forbes.

You could see Giselle Bundchen wears a skimpy bikini here and also here.