Gwen Stefani admits there was some conflict when she got back together with her band, No Doubt. 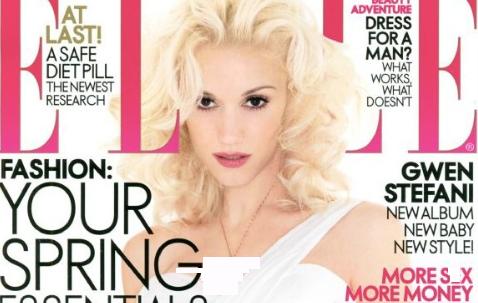 “Everybody’s making it like there’s all this tension, you know, like I stepped away from the band and now they’re jealous of me, and look, maybe there is a little bit of that,” Gwen says in a new interview with Elle magazine.

“But some fights aren’t really what they seem,” Gwen says, adding that the band attempted to write a new record before going on tour, but were unable to come up with new material. “I think it was a little about the song, and a little about our coming back together. There was this little air bubble that needed to pop, you know?”

Stefani also dished on motherhood, saying, “It’s one thing when you have an infant, but when you have this two-or three-year-old going, ‘Mommy, what’s the deal?!’ it’s harder.

“Kingston’s whole thing is, ‘I need, I need.’ He is insane right now. We’re just hoping for the best and that he’s not going to turn out to be a freak, but we’ll see.”

On being a celebrity: “Obviously, I’m not anything more than I am. I’m just, like, totally normal. The fact that any of this has happened, that we’re sitting here at the Beverly Hills Hotel just gets me going, like, What?”

On how her priorities changed from band to family: “I wasn’t even married. Now I’m a wife and a mother of two. It’s a really different role. I always referred to No Doubt as a marriage, because that’s what it’s like to be together for so long and go through what we’ve been through. I can’t really have that relationship with them anymore. My priorities are always going to be my husband and my family now. That’s a huge, huge thing.”

Check out the new issue of the magazine for the full story on Gwen Stefani, on newsstands June 15th. The last time the singer landed on Elle was back in February 2007, as photographed by Gilles Bensimon.