Halle Berry, who chose not to sell the first pictures of her daughter to the highest bidder shunned the celebrity trend of selling first baby photos of Nahla. 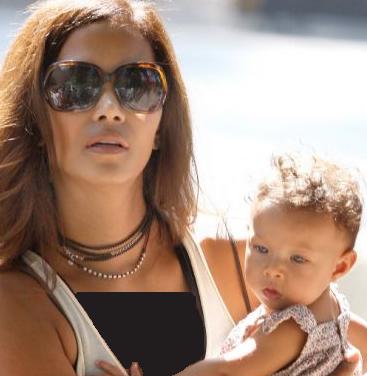 The actress and her baby daughter Nahla are spotted while they are enjoying a family day out. The cuddly Nahla showed that she inherited her mother’s star quality as she charmed the onlookers with her blue-eyed smile.

The baby’s dark hair shows that she takes after her mother in some ways, but her blue eyes are a nod to her blonde grandmother, Judy

Halle Berry was accompanied by her mother, blonde Judy Berry on her trip to LA Zoo. Her French-Canadian model boyfried Gabriel Aubry was not present in the girl’s day out.

The 42-year-old actress is a picture of health as her womanly curves showed that she has chosen to avoid another worrying celebrity bandwagon. It is a good sign that she lost huge amounts of baby weight in a matter of weeks after giving birth. After an exhausting day in front of the camera Nahla takes a well-earned 40 winks as they head back to the car.

If she is going to marry again, the twice-married actress once declares that she would not tie the knot a third time, explaining: “I will never marry again. I have a good healthy love for myself and love in my life. I no longer feel the need to be someone’s wife and I don’t need the validation of a marriage certificate.”

However the unmissable sparkler on her wedding finger left onlookers wondering if she had changed her mind.