Miley Cyrus has expanded the scope of her alter-ego, pop sensation Hannah Montana, into U.S. theaters for just one week. 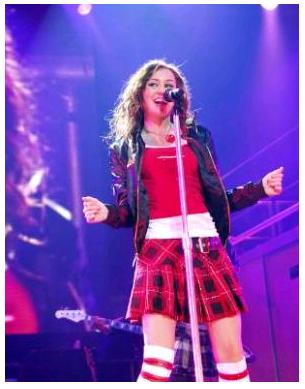 After great success with “Hannah Montana” series and U.S. musical tour, Miley Cyrus can now be seen on the big screen in a 3-D concert film, according to a report.

The limited release film features Miley Cyrus performing as Hannah Montana for a series of the most popular songs from her 55-city “Best of Both Worlds” tour. Cyrus then sings her own music for the second half of the film.

The concert film includes a lavish stage complete with multiple video screens and pyrotechnics, along with an appearance from the tour’s accompanying band, the Jonas Brothers. Unlike the tour, the concert film allows the young fans of “Montana” to see back stage as the camera follows Miley Cyrus prepares for her performances.

Meanwhile, plans by the company releasing U2 3D, the rock group’s concert movie, to expand the film on Valentine’s day were shot through the heart Thursday when it appeared that Disney might want to use many of the same 3-D theaters to extend the run of Hannah Montana/Miley Cyrus: Best of Both Worlds Concert Tour.

Disney had originally planned a one-week run at 683 3-D theaters for the tween concert film, which begins today (Friday) — but, with many of the screenings sold out, it reportedly now plans to expand the film into additional venues through February 15.