Brad Pitt has recently revealed that he is paranoid and vulnerable. Is it possible that Angelina Jolie has turned Brad Pitt into a wimp? 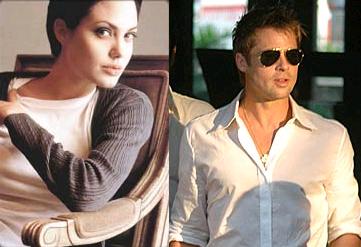 In a recent overheard conversation Angelina Jolie basically told a man in a bar that she wears the pants in the family and Brad Pitt was more like a trophy boy meant to sit and look pretty.
When a sixteen-year-old fan only wanted a hug from Brad Pitt, he said he felt vulnerable. He basically called the girl “unbalanced” and then claimed he has radar to keep him warned of these situations.

The actor also now believes that he is Jesse James and is hunted. The Jolie-Pitt clan is a prime paparazzi target and he should be concerned for his kids’ safety. But his recent statements sound a bit over the top. He has even accused the paparazzi of trying to get crotch shots of Angelina Jolie and says he is run out of every major city.

The celebrity couple was happy to play the paparazzi game when promoting Mr. and Mrs. Smith. The only reason that film was a hit was the games the pair played as they denied their romance on set. Now it appears that if the situation gets tough and the films aren’t doing well at the box office Brad Pitt may want a shift and some privacy.