Hayden Panettiere, the star of “Heroes” has recent photo shoot in August issue of You Magazine. 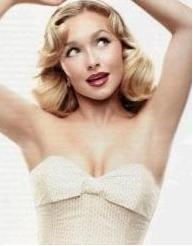 In her interview, the actress speaks about her role as Claire Bennet in “Heroes”. She also expressed the idea that she did not like to be compared to Lindsay Lohan, saying, “I don’t have anything mean to say about her, but when you’re a young woman you get pigeon-holed.”

The young actress is also committed to charity work in a non-profit organization that saves whales.