Heath Ledger, the Oscar-nominated actor, was found dead inside his apartment in Manhattan’s SoHo neighborhood on Tuesday. 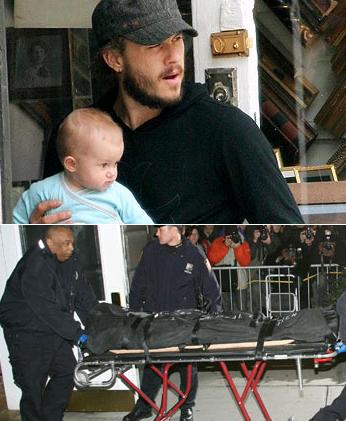 The 28-year-old actor was discovered Tuesday afternoon when a male masseuse arrived for a scheduled appointment around 3:30pm. Unable to enter the apartment, Heath’s housekeeper opened the door and found the actor unresponsive and unclothed in the bed with pills scattered around. Authorities were contacted and the actor was eventually pronounced dead around 3:45pm.

Amid a flood of reporters and onlookers, the medical examiner arrived on the scene at 5:40pm. Heath’s body was eventually wheeled out of the building at 6:30pm.
Police sources revealed that Heath Ledger did not die of a suicide. The actor was found [email protected] on the bed in his New York apartment this afternoon, with an open bottle of sleeping pills near his body.

Paul Browne, the NYPD Deputy Commissioner, said that there were three prescription bottles found, all in Heath’s name. He wouldn’t elaborate on what the pills were but said that they included sleeping pills, saying, “There were some still left in the bottle. They were not scattered around the apartment.”

The Deputy Commissioner confirmed that Heath was found facedown at the foot of the bed, unclothed, and his body was half off the bed, adding, “The room was not in disarray. There were no apparent signs of foul play.”

The police also have stated that they have yet to find any illegal substances in the room. The official cause of death will not be released until after the medical examiner has had a chance to look at the body and can file a proper report. An autopsy is expected to begin Wednesday.

Teamba Mossa, the superintendant for the building, confirmed that the actor did not own the apartment, and that he received a frantic phone call from the housekeeper following her discovery of the star’s body. He also revealed that the actor was a very good tenant since moving into the building in the fall of 2007.

A statement issued by Warner Bros., the studio behind Heath’s upcoming Batman film, indicates, “The studio is stunned and devastated by this tragic news. The entertainment community has lost an enormous talent. Heath was a brilliant actor and an exceptional person. Our hearts go out to his family and friends.”

According to a friend of the actor, Heath was severely depressed following the August split from former girlfriend Michelle Williams, with whom he has a two-year-old daughter Matilda. The friend said, “He frequently seemed comatose and out of it. Heath had serious problems with drugs, including cocaine and heroin.”

However, the friend added that Heath had been trying to stay sober in recent months, explaining, “At a party in December, he was doing his best to avoid people doing drugs. But that didn’t seem to work, as he was spotted partaking later in the night.”

Heath was in the middle of shooting the film “The Imaginary of Doctor Parnassus” but it was the last film he starred in that might have contributed to his problems. Playing the Joker led Heath to experience trouble sleeping.

The actor revealed in an interview, “Last week I probably slept an average of two hours a night. I couldn’t stop thinking. My body was exhausted, and my mind was still going.” He said he took two Ambien pills, which only worked for an hour.

BREAKING NEWS: A report revealed that Heath Ledger was sick with pneumonia when he died today. Their story says Heath Ledger “was reportedly in full cardiac arrest when the paramedics responded. CPR was performed on him but was futile. He was pronounced dead on the scene.”

Heath Ledger’s family released a statement indicates that Heath’s death was not suicide. The family’s rep reportedly told the site that the family are “distraught over media reports that he may have taken his own life … [that] he was not that kind of person.”