Adnan Ghalib, the paparazzi boyfriend of Britney Spears, has stunned fans after revealing the troubled pop singer had hoped she was pregnant with his child. 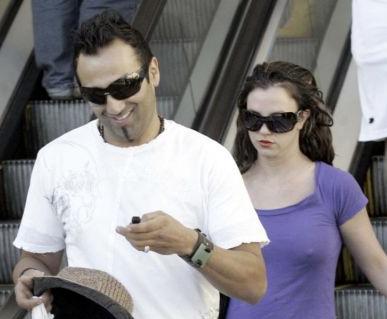 The British photographer went public with the truth about his brief romance with Britney Spears on U.S. news show last Tuesday night (January 22).

He revealed that the fling was “far from over,” despite reports Britney Spears has dumped the snapper and filed a restraining order against him. He also confessed his late-night pregnancy test with the pop star was for real as he insisted that Britney Spears really thought she was pregnant with his child.

He said, “She was hoping she was pregnant with my child… She felt that she was (pregnant). She has a very maternal instinct. She was feeling a lot of things she said she felt when she was pregnant.”

But the photographer also insisted that the “Gimme More” singer is not pregnant. He also lashed out at split reports, saying, “People don’t like happy in Hollywood… People don’t want fairytale endings. I don’t think anybody wants her (Spears) to be happy… And scandal sells.”

Meanwhile, his wife AzLynne Berry has filed for a legal separation from the photographer. The 28-year-old model-turned-beautician is keen to end her relationship with the British snapper, and has cited irreconcilable differences for her split in Los Angeles County Superior Court.

She said, “We were living together as man and wife when he started romancing Britney. I believed he was purely working and was trying to win her confidence for a photo shoot. He’s broken my heart and I haven’t stopped crying for two weeks. She’s as much a mug as I was if she says she believes him when he says he loves her.”