Susie Amy is a British actress famous for her role as Chardonnay Lane-Pascoe in the first three seasons of “Footballers’ Wives”. 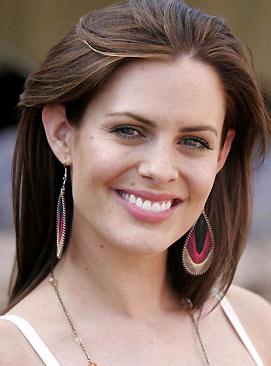 The actress, who’s starring in new ITV1 soap Echo Beach—looks pretty tasty as she whips off her outer shell to reveal slinky black underwear, which you could see here and here.

And these sexy snaps will show her former boyfriend Max Beesley what he’s missing out on the catch of the day.

The 26-year-old actress is making waves on Echo Beach, which is set in the fictional Cornish town of Polnarren.

She plays Angela Cole and stars as herself in the behind-the-scenes sister show Moving Wallpaper.

A television insider revealed, “Susie’s star is definitely on the rise.”

On the details if Richard say anything so embarrassing that you wanted to punch him in the face on “Richard & Judy,” she answered, “I love them two! They are so comical. I’m not sure if they mean to be comical – I don’t know what it is about them. I love the way they are with each other. A husband and wife who aren’t all over each other all the time is just a perfect combination. I love it when she says, ‘Just shut up, Richard!’. It’s quality. But no, Richard Madeley didn’t say anything bad to me, thankfully. Sorry to disappoint!”

On how was a Footballers’ Wives being a bit racy, she replied, “I was quite lucky, really – I didn’t have to do too much in the way of nudity. That all came after I left. But if you’re comfortable with taking your clothes off, it’s fine. If you’re not, though, it will probably come back to haunt you.”