Heidi Klum, who obviously got nice breasts, looked great being a model for Victoria’s Secret. 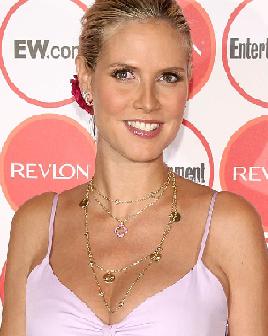 The sexy wife of star singer Seal has hit the Internet with a video what looks like an ad shoot where she even boasts of her own “great knockers.” The video has been posted online, which you could see here.

In the video, she looks adorable as always and she has a blast just kidding around on the video and sort of pulls a “machine gun jugglies” type scene fro Austin Powers that Elizabeth Hurley once pulled off as a “Fembot in the popular series.”

And Heidi has been very loose and free of late. She revealed her first meeting with her man after a sweat session while he was wearing bicycle shorts, saying, “I met him in a hotel lobby in New York City and he came in just from the gym and I was sitting there and I was, like, wow. And I pretty much saw everything. The whole package.”