There is a speculation that the lyrics of the Hillary’s song, “Gypsy Woman” had a scathing attack against Nicole Richie, the new girlfriend of Joel Madden. Hilary Duff has previous relationship with Joel Madden. 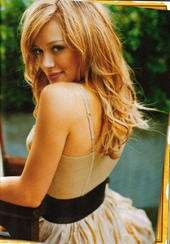 The pop star, insisted the speculation is not true. She revealed, “It’s not my job to talk about my relationship. But the more you try to keep it quiet, the more people want to know about it.”

Hilary Duff, 19, expressed the pressure she feels to be thin. She feels media could be “judgmental and mean.” She revealed, “If you don’t like the way you look or feel insecure, when people say things about you – in magazines or just in everyday life – they can be hurtful. But you’ll never make them happy.”