Holly Madison is chained [email protected] to the bottom of the sea as she posed for a photo shoot. 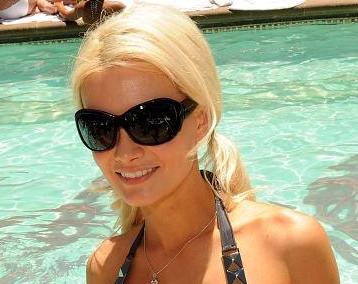 The busty Playboy blonde – former girlfriend of HUGH HEFNER – treated schools of fish to an X-rated underwater display as she posed for a kinky shoot.

With a chain wrapped around her body, Holly rested seductively on the sea bed before popping out of the water for a shot of her famous chest.

And for good measure, the pretty model also flashed her bum as she leaned over a giant rock.

The 29-year-old model, who made her claim to fame as Hugh Hefner’s “main girlfriend” for the past several years, hinted on her Twitter account earlier in the week that she was considering circling the outside of the Octagon this weekend.

In today’s blog, Madison is seen talking to White and getting tips for Saturday’s duties while wearing a UFC ring girl uniform.

White tells Madison that the organization will begin publicizing her involvement in the event and a new TV project today.

Madison will be joining the likes of Arianny Celeste, Edith Labelle, Logan Stanton and a soon-to-be-announced ring girl inside the Mandalay Bay Event Center in Las Vegas.