Like the stars themselves, celebrities’ holiday plans are all over the map this year. From getting lots of presents to getting General Tso’s, Hollywood A-listers reveal how they’ll ring in the holiday cheer. 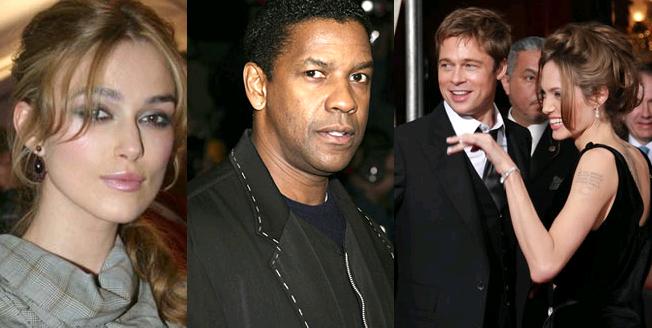 Keira Knightley: “I’m celebrating Christmas by eating a lot, drinking a lot and sleeping a lot. I’m going into hibernation.”

Angelina Jolie: “We try to celebrate as many cultures as possible. We celebrate the Moon Festival for my boys, who are from Asia.”

Brad Pitt: “We’re trying to incorporate Kwanzaa and other traditions that we’re just learning about ourselves.”

Hilary Swank: “I was asked to go to Europe to promote this movie, and I said, `I’ll go right up ’til the 21st [of December], when the movie opens, but please let me be home for Christmas.'”

Liam Gallagher: “My mate’s got a gaff [house] in Switzerland, and we’re going out there with the kids for five or six days just to hang out. I don’t think we’ll be doing any skiing, but I’ll be there looking like James Bond with the kids — just throwing snowballs and sh*t.”

Joe Trohman (Fall Out Boy guitarist): “I will most likely do my usual Chinese food and a movie, which in my family is an important tradition. General Tso’s chicken and a movie with someone similar to, but not necessarily Matt Damon. F***ing paradise.”

Diane Kruger: “I’m going to Germany; I haven’t been home in two years. My mum made it clear — if I don’t come home, I’m not her daughter anymore.”

Pete Doherty: “Let’s just say we’re not dreaming of a white or brown Christmas… It’s going to be mince pies for me this Christmas. I’ve got a massive order on the way.”

Johnny Borrell (Razorlight frontman): “The only thing I’ll be snuggling up to is my guitar.”

Billy Bob Thornton: “I’m traditional all the way. I can’t stand it when people open their presents on Christmas Eve. I want you to wait until the morning when Santa Claus comes.”