A family court suspended Britney Spears’ visitation rights to her two young sons on Friday after the troubled pop singer was hospitalized in a fit of hysterics over their handover to former husband Kevin Federline. 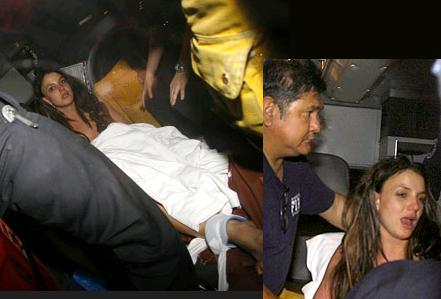 The document indicated that Britney Spears “visitation with the minor children is suspended pending further order of the court.” It added that Kevin Federline was awarded “sole legal and physical custody” of the boys. The order is in effect until January 14.

The court order was issued as the “Gimme More” singer spent the day in a Los Angeles hospital, apparently under mental evaluation. She lost custody of the boys in October 2007 but had been allowed court-monitored visits three times a week.

But at the end of their visit on Thursday night, police were called to her Los Angeles home when she refused to hand the boys back to K-Fed’s representatives.

Television pictures showed Britney Spears being taken out of her home on a stretcher and driven to Cedars-Sinai Medical Center in an ambulance after a four-hour standoff in which the pop singer reportedly locked herself in a bathroom.

According to a source, it was the pop star’s court-appointed child monitor who called police, saying, “She had already put Preston in the car when Britney locked herself in a room with Jayden. The cops came and got through the door and tied her down to a gurney.”

Jason Lee, the Los Angeles police spokesman, revealed that Britney Spears was under the influence of an unknown substance and was being detained and evaluated in the hospital.

Meanwhile, a source at Los Angeles’ Cedars Sinai Medical Center, revealed that the 26-year-old singer had been designated a “special needs” patient and was under constant watch.

Another source revealed that in the ambulance Britney Spears had to be restrained like a mental patient and she “was going between laughing and hysterics.”

Cedars Sinai Medical Center declined to comment, citing patient confidentiality. But a source added that Britney Spears will be on a minimum of a 72-hour lock down for mental evaluation.

The evaluation, known as a “5150 Hold,” is, according to the medical code, “When any person, as a result of mental disorder, is a danger to others, or to himself or herself, or gravely disabled.” The “mobile crisis team” is able to make this recommendation in writing and take a patient be evaluated and treated.

On details of Friday’s closed door court hearing, K-Fed’s lawyer declined to give a comment, saying, “I am not happy about anything that has happened recently. There are no winners right now.”

Britney Spears lost primary custody of her kids to Federline after her life spun out of control following their divorce, her stints in rehab, a bizarre head-shaving episode and reports of drinking and drug use. She is currently undergoing court-ordered random drug and alcohol tests and parenting lessons.