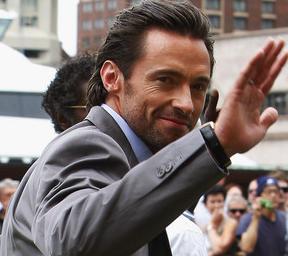 The actor, who recently topped People magazine’s annual list of the most attractive guys in the world, admitted his spouse Deborra-Lee Furness was shocked when he was given the title this year.

The “Australia” actor revealed: “The very first thing my wife Debs said was, ‘I knew it, I knew I would marry the sexiest man alive.'”

The actor added: “The second thing she did was ask about the process and how I was chosen. She said, ‘Who voted? Was is readers? Was it editors?’ I said, ‘I think it was the editors, there is a think tank somewhere and they look at photos and they work out who is doing a movie at the moment and whose publicist they are on good terms with and then they decide.’ So Debs said, ‘That means anyone can get it?’ And I said, ‘Yes’, and she replied, ‘And Brad Pitt didn’t get it?!’ ”

Brad Pitt has been named the Sexiest Man Alive twice. Other previous recipients include George Clooney and Matt Damon.