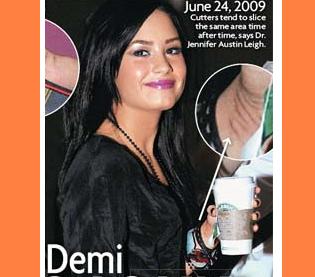 There now appear to be at least five nasty-looking slashes, where previously there were only a few.

“Demi has been really stressed out about her new show, Sonny with a Chance,” a source tells Star. “She’s not getting enough downtime because there is so much work involved, and she’s always being pulled in different directions.”

Unfortunately, that constant pressure may lead to destructive behavior. “Cutting is how she can let go of the stress that has built up inside — when she cuts herself, it’s a way to cope,” explains Dr. Jennifer Austin Leigh, a San Francisco–based psychologist who specializes in treating teenagers.

But there is hope, adds Dr. Leigh, who has not treated the actress. Besides counseling, Demi “needs to surround herself with family and friends who will have a positive impact on her.”