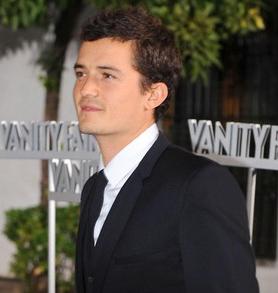 The “Pirates of the Caribbean” actor is blissfully happy with Australian supermodel Miranda Kerr, and the pair are reportedly making plans to tie the knot.

A source revealed: “They are talking about settling down and getting married in a year. They have had a bit of a crazy year, but they do love each other and she wants to be his wife.”

The couple were recently spotted enjoying a romantic meal at exclusive Californian restaurant Primitivo, where they held hands and canoodled throughout the evening.

Miranda, 25, was sporting a collection of expensive jewelery, which included a stunning jewel-encrusted bracelet, most of which had been bought for her by Orlando, 31.

He reportedly spent $2,000 on Afghan jewelery for her at a recent charity auction, and has since demanded she throws out any baubles from her previous boyfriends.

A source revealed: “At Primitivo Miranda was saying she only wears stuff from Orlando now!”