On the night before Michael Jackson’s will was expected to be filed in court, heavy construction equipment and workers passed through the wrought-iron gates of Neverland Ranch, fueling speculation that it could soon be hosting a funeral or permanent memorial to the King of Pop. 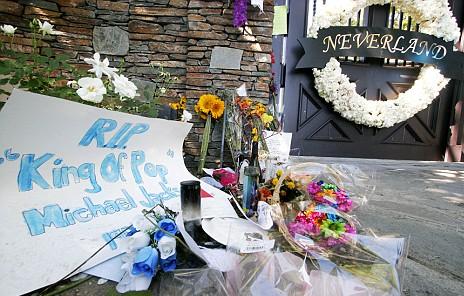 Late Tuesday, Santa Barbara County officials said there were no final decisions by the Jackson family for any funeral or memorial service in the county or at Neverland.

All the same, more than a dozen vehicles, including a tractor, a cement mixer and a backhoe, along with groups of gardeners and florists bearing huge wreaths, were spotted on the property about 120 miles northwest of Los Angeles.

At once a symbol of Jackson’s success and excesses, Neverland  the 2,500-acre property nestled in the hills of Santa Barbara County’s wine country  became the site of a makeshift memorial after his death Thursday.

Members of Jackson’s family met Tuesday with officials from the Los Angeles police and California Highway Patrol about funeral services but “details are still pending,” according to Fran Clader, a spokeswoman for the patrol. The patrol would need to be consulted if the body was moved from Los Angeles to Neverland.

It was unclear whether Jackson could be legally buried at the ranch. The state’s health and safety code makes interring any uncremated remains outside of a cemetery a misdemeanor. Cremated remains can be kept in a home or private mausoleum outside a cemetery, he said.

Jackson’s will was to be filed Wednesday in Los Angeles. A person with knowledge of the document told The Associated Press on Tuesday that it gives guardianship over his children to the singer’s mother and leaves all his assets in a trust fund.

The will was signed on July 7, 2002, and named as executors Jackson’s longtime lawyer John Branca and John McClain, a music executive and a family friend, said the person, who spoke on condition of anonymity because he was not authorized to speak on the topic.

The family said in court documents Monday that it believed the 50-year-old entertainer died Thursday without a valid will and moved swiftly to take control over his lucrative, but debt-encumbered, estate.

The judge also gave her control over some of her son’s personal property that is now in the hands of an unnamed third party. But the judge did not immediately rule on her requests to take charge of the children’s and Jackson’s estates.

On its face, the move by Jackson’s family to proactively take legal action does not seem to conflict with the singer’s stated desire to have his children put under his parents’ care and their financial welfare assured.

Experts said the personal bankruptcy of Jackson’s parents in 1999 could work against Katherine taking control of the estate.

Court documents show Katherine and Joe Jackson filed for Chapter 7 and listed nearly $24 million in debts that included court judgments, auto loans and credit cards. The only valuable asset listed was a house in Las Vegas then valued at $290,000. The bankruptcy was terminated in March 2007, but the documents gave no further details.

“I think it would be a negative factor but not necessarily a disqualifier,” said Beth Kaufman, a Washington, D.C.-based attorney specializing in estate tax issues. “It could indicate that she is not capable of sound financial management.”

More details emerged Tuesday about the recent state of Jackson’s finances. In the most detailed account yet of the singer’s tangled financial empire, documents obtained by the AP show Jackson claimed to have a net worth of $236.6 million as of March 31, 2007.

Since that time both Jackson’s debts and assets grew substantially  he refinanced loans later that year that increased his debt load by tens of millions of dollars, but the Sony/ATV Music Publishing joint venture he is a part of also spent hundreds of millions acquiring new songs.

Jackson’s own health was a concern in his final days. A nutritionist who was working with the singer as he prepared his comeback bid said Jackson was so distraught over persistent insomnia in recent months that he pleaded for a powerful sedative despite warnings it could be harmful.

Cherilyn Lee, a registered nurse whose specialty includes nutritional counseling, said she got a frantic phone call from Jackson four days before his death that made her fear that he somehow obtained Diprivan or another drug to induce sleep.

Lee said Jackson in the call complained that one side of his body felt hot and the other side was cold, prompting her to believe the “somebody had given him something that hit the central nervous system.”

“He was in trouble Sunday and he was crying out,” she said.

Meanwhile, on the other coast Tuesday, thousands of Jackson fans crammed into New York City’s famed Apollo Theater for a public tribute to the performer, clutching photographs, cheering and dancing to his music at the legendary venue that launched the one-time child star’s career.

“He knew he was loved, but he didn’t know he was this loved,” said one participant, Rosiland Sargent, 59, of West Orange, N.J.