Jamie Lynn Spears, who has landed in the Star magazine cover, was rumored to giving up her baby. 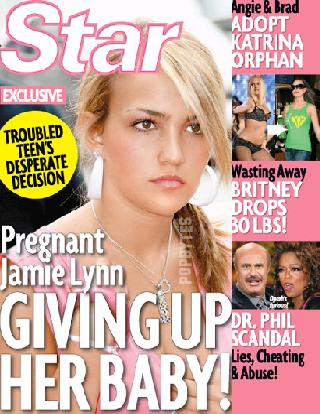 The sixteen-year-old star announced late last year that she was pregnant and she named the father in a previous interview. At that time, she said she was going to keep the baby and said she was about three months along in her pregnancy at the time.

Now Star Magazine reported this week that Jamie Lynn has made a “desperate decision” and they seem to insinuate with the screaming headline “Pregnant Jamie Lynn Giving Up Her Baby” that she will still have the baby but perhaps allow someone else to raise it.

There has been a ton of speculation all around Jamie Lynn Spears and the man named as the father, Casey Aldridge, getting married. But would they really give up the baby? As Jamie Lynn’s career continues after the birth she will likely relay on family to help her with raising the child but it seems a bit far fetched that she would give the child up.

It would be almost impossible to adopt the child out with all of the publicity surrounding the pregnancy and the birth. It will be interesting to see what the full article says, but the best guess is that Jamie Lynn and her family will raise the child. Perhaps you will have to grab the magazine to read the entire full article.

Aside from the issue that Jamie Lynn Spears thinking about giving up her baby for adoption, her sister Britney Spears is also featured in the magazine after dropping 30lbs, Brangelina’s Adopt Katrina orphan speculation and Dr. Phil scandal – with claims of lies, cheating & abuse.