Jamie Lynn Spears and her fiancé Casey Aldridge have found their dream house. 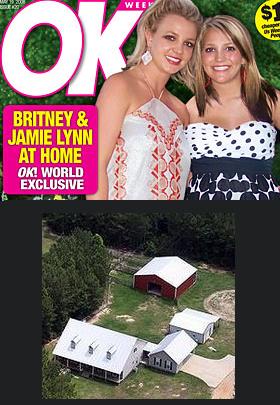 After months of house hunting, it seems that the “Zoey 101” star and her beau have bought a house. The house certainly looked adorable and simple with the hint of country style.

Casey Aldridge was reported to work as a corrosion technician for a local company called Coastal Corrosion, is thinking of going back to school in the area so he can be available to help with the baby.

As for Britney Spears, she said she currently has no plans to go back to work, but that “you never know what may happen a year from now. There is the possibility I’ll go back, but right now, I just want to be a good mom.”

The actress has spilled the beans on how her pregnancy is going, her reunion with sister Britney Spears and her future plans:

The Spears sisters had not seen each other since October so the baby shower seems a good reunion. The party, which was hosted by their mother Lynne Spears at Kentwood estate, Serenity, was attended by 20 friends, but not the girls’ father, Jamie Spears, who flew to Louisiana with Britney on a private jet from Los Angeles the day before.

Jamie Lynn Spears revealed, “It was wonderful to be able to spend time with her and just be girls again. We painted our nails and did stupid stuff, and we had our private time too. To be able to be in the privacy of our own home and just be sisters again was wonderful.”

She also revealed, “[Britney Spears] just “ran up. She obviously couldn’t pick me up. [Laughs.] We gave each other a big hug. It was a really good feeling.” The first words the sisters reportedly exchanged were “I love you. I’ve missed you. It’s so good to see you.”

Britney Spears also gave some advice to her younger sister on raising children and she told her that there “are going to be some long nights, but it is completely worth it.”

On taking a pleasure with the joy of motherhood, Jamie Lynn Spears said, “It’s when she kicks, when you know she’s there. When she kicks me, I love it. I want to squeeze her already. I do talk to her, you know, like all moms talk to their babies. I just tell her how much I love her.”

The gifts that she received: Her mother’s friends gave her “all the important stuff I need,” which included Dr. Brown’s baby bottles, “adorable” clothes and a baby sling.

The party included a game where guests tried to guess how big Jamie Lynn’s belly is by wrapping a piece of toilet paper around it, and she admitted that she’s probably gained 20 pounds or more so far and that she feels really “big.” She said whatever the amount is, “I’m pretty normal, I think. It’s a beautiful thing. I’m not going to worry about gaining weight. I’m just trying to stay healthy. I’ve been liking chocolate milk a lot. I’ve been drinking a glass at least once a day.”

Along with reading such motherhood bibles as “What to Expect When You’re Expecting” and “Motherhood,” Britney Spears has had her share of morning sickness, which was so bad during her first three months that she barely gained any weight.

If she’s going to hire a trainer after she gives birth to help her get back in shape, Jamie Lynn replied, “I want to get back to my old weight, but you can’t work out right away. I don’t want to stay this way. I’ll just stick to my treadmill and weights, and I won’t eat cheese every day. You don’t have to pay somebody a bunch of money to make you skinny again. If you want to be skinny, you have to do it yourself. And I love to swim, so I know I’ll be doing a lot of that.”

She added, “The dad’s influence on a baby is really important. It doesn’t matter where they come from or what they do. It’s all about how they love the baby. If they love the baby, that’s all you can ask. I’m just so focused on the baby. I’m so excited about the baby I can’t think of anything else. When things settle down, [a wedding] will be my first priority.”

She revealed that Britney Spears “loves” Casey, who she has met a number of times, and the two future in-laws had a chance to bond over the weekend while riding four-wheelers on the property.