On March 4, Jamie Lynn Spears and her boyfriend, Casey Aldridge, were spotted leaving their New Orleans hotel after attending her sister Britney Spears’ Circus comeback concert the night before. 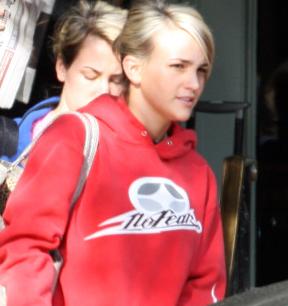 While Casey tenderly held their 9-month-old daughter, Maddie Briann, Jamie Lynn loaded her diaper bags, toys and pink stroller into the minivan. Then the family took off on the four-hour drive back to their Mississippi home.

The young unmarried couple looked as connected as could be on their trip to cheer on Britney at her first show. But now Jamie Lynn – who was 16 when she shocked the world by telling OK! in December 2007 that she was expecting a child with her 18-year-old boyfriend – has decided not to walk down the aisle with him.

“The wedding’s off,” a source reveals to OK!. “They are still in love, living together and very happy, but they have no plans to get married. Jamie Lynn has everything she wants and feels no need for a ring and piece of paper.”

Adds another insider, “She and Casey have weathered a lot in their young relationship already and don’t need the pressure of making wedding plans.”