Jennifer Aniston found another Brad. Definitely it is not Paul Sculfor or Vince Vaughn. A report claims the actress met Brad(ley). 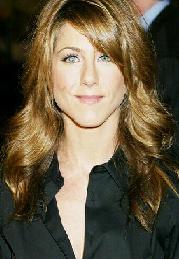 The new man of the actress is Bradley Cooper. According to the reports, Jennifer recently enjoyed a romantic dinner date with the handsome man, who’s just 32 and newly single!

The pair are set to costar in the upcoming romantic comedy “He’s Just Not that Into You”, and Bradley also has a former girlfriend named Jennifer who dumped him. It was Jennifer Esposito that filed for divorce last May after 5 months of their wedding. A friend revealed, “He was devastated. But that’s all in the past now. He’s Jen’s new Brad, and she’s his new Jen!”

The costars met at Bradley’s Brentwood home, through a mutual friend Drew Barrymore. As co-producer, Drew desperately wanted Jen to do the film. But Jen was reluctant to sign on.
A source revealed, “Drew pushed, and Jen finally agreed to meet with Bradley. Jen wanted it quiet and low-key so he invited her to his house, and it was great. Brad lit some candles and made dinner. He’s a good cook. They made a good connection. She loved his house, loved his dogs and most importantly, loved talking to him.”

Jennifer Aniston agreed to star in the film and she found a guy she’d like to see a lot. A friend revealed, “She’s really excited about Bradley. She’s now probably thinking, like Paul who? Bradley and Jen really hit it off and genuinely liked each other.”
As for their compatibility, a friend added, “They have a lot in common. They love animals, for one – Jen has two dogs and Bradley has 3. And they’re both athletic and like weekend getaways.”