Jennifer Aniston, who got instant attention with her on-screen kiss with with Courteney Cox on the series “Dirt”, was filming the ensemble comedy “He’s Just Not That Into You” with Ben Affleck. 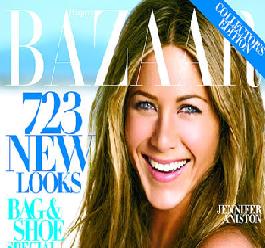 In an interview with Harper’s Bazaar, in which she also graces the cover of its November issue, the actress revealed, “I’m ba-ack!”

The 38-year-old actress, who is top-selling celebrity face on newsstands, seems a good cover model for the 140th anniversary issue of Harper’s.

She also revealed what she’d really like to do is work on her “labor of love.” As for “Goree Girls”, it is the story of a 1940s female country band that started in prison. The actress revealed, “Yep. I can carry a tune, and I was known to throw out a jazz hand from time to time in high school.”