Jennifer Aniston appeared to be in good cheer as she headed to the set of her movie, The Baster, which started filming in New York City today. 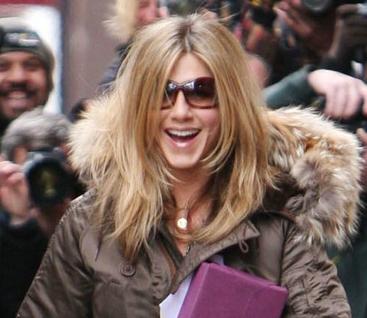 She smiled and waved at photographers instead of ducking into a hoodie as she did last week.

Aniston filmed an awkward date scene with co-star Jason Bateman in Greenwich Village restaurant Barbuto today, which showed the two sitting at a booth inside the restaurant attempting to have a conversation, reports OK!

Actually, Jen has more than the start of her film’s production to cheer about. It is rumored that she dumped ex John Mayer because of his proclivity to twitter for hours and yet not find the time to call her. If that is indeed the case she is probably deriving solace from John Mayer’s recent slamming of Twitter.

The Baster, tells the story of a single, 40- year-old woman who resorts to artificial insemination to get pregnant.

Meanwhile, it was like being at a new school on the first day of class for superstar Jennifer Aniston on Monday, as she began work on the NYC set of her upcoming film, The Baster.

The former Friend spent her day inside Greenwich Village restaurant Barbuto, shooting an awkward date scene with co-star Jason Bateman. The set-up involved the actors sitting at a booth inside the restaurant attempting to have a conversation.

Perhaps Jen was trying to stay in character between takes, because witnesses revealed she wasn’t any friendlier when the cameras stopped rolling. “Jen kept mostly to herself,” one on-set source reveals. “She didn’t talk to anyone during the breaks.”