When director/writer Stephen Belber grabbed Jennifer Aniston’s butt at the New York screening of Management, on Tuesday, May 5, he was merely emphasizing an endearing facet of the film. 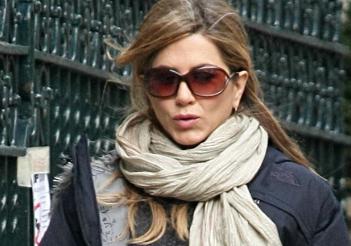 “He’s allowed, He wrote it” she added hastily and laughed.

The comedy film features Steve Zahm as flaky motel manager, Mike, who is attracted to a traveling art saleswoman, Sue Claussen (Aniston), but has a strange way of reaching out to her – By asking her if he can grab her butt!

Reading the scene in the script hooked Aniston to the film.

“It is one of the most memorable scenes in the movie,” she says. “One of the main reasons that I took the job. I have never laughed so hard.”

Meanwhile, Jennifer Aniston hugs it out on the set of her new film The Baster, in New York City on Wednesday (May 6).

Afterwards, the 40-year-old actress smiled and laughed while enjoying the beautiful spring weather with a friend.

The former Friends actress will be honored alongside Holly Hunter, Elizabeth Banks, Catherine Hardwick and cinematographer Petra Korner at the 2009 Crystal + Lucy Awards on June 12. Jen will be receiving the Crystal Award for Excellent in Film. Women in Film, Los Angeles, presents the annual event.