Though Jennifer Aniston hasn’t exactly been doing her best to make friends with the cast and crew on the NYC set of her film The Baster, the actress might be going out of her way this weekend to help her dad — and raise some money for sick children. 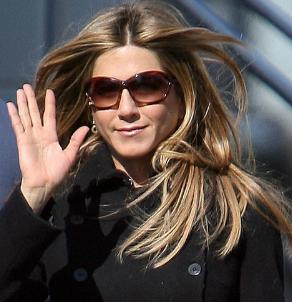 Jen’s father, soap opera star John Aniston, is already slated to appear at a Manhattan Barnes & Noble on Saturday to read from the children’s book, Loukoumi’s Good Deeds. John and Jen both give voice to characters on the book’s accompanying audio CD. And sources are revealing that Jen might put in a surprise (well, it was a surprise) appearance to help out her dad and the other readers, including American Idol alum Constantine Maroulis.

Of course, when contacted, a spokesperson for Barnes & Noble said that Jen is not expected to be at the event.

Regardless, Loukoumi’s Good Deeds is a book near and dear to Jen’s heart — two dollars from the sale of each copy goes to St. Jude’s Children’s Research Hospital. The former Friends star has been a champion of St. Jude’s for years.

Jennifer Aniston waves to the photographers as she returns to her trailer after filming her latest movie The Baster on Tuesday (March 31), in New York City.

An insider said: “Jen refused to walk even a step outside the restaurant during the break for lunch. She had her car pull up right next to the restaurant so she could be driven less than a block to her trailer to avoid photographers.”