Jennifer Aniston had no idea she would be upstaged by the dogs in her new movie. 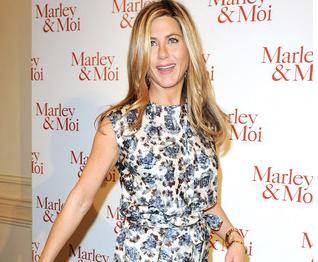 The 40-year-old actress admits she and Owen Wilson often struggled to steal the limelight from their canine co-stars while filming romantic comedy ‘Marley and Me’.

Speaking about the character of Marley, Jennifer joked at the UK premiere of the film in London’s Leicester Square last night (02.03.09): “They didn’t warn us about that. Those dogs in the movie were really good!”

Owen, who looked dashing in a dark grey Burberry suit, laughingly revealed the dogs didn’t always behave themselves during filming.

He explained: “There was one scene where one of the Labradors kind of lifted his leg and he wasn’t supposed to.”

Owen – whose own pet Garcia had a cameo in the movie – insists he and Jennifer enjoyed working with the loveable animals because they are both dog owners.

He explained: “I had a real soft spot for Copper, who was a 25-year-old Labrador. But they all did great.”

Both stars braved chilly temperatures to sign autographs and pose for photographs with fans.

The former ‘Friends’ actress revealed she hopes to work with Owen, also 40, again in the future.

Speaking about a possible collaboration, Jennifer said: “That would be nice. We had a great time.”

“Marley and Me,” which was based on the best-selling autobiographical book by John Grogan, tells the story of a young married couple who end up buying a puppy which they soon realise is the “world’s worst dog”.