Jennifer Aniston has embarked on a romance with her The Bounty costar Gerard Butler in the hope it will make her former husband Brad Pitt jealous enough to get back with her, it has been claimed. 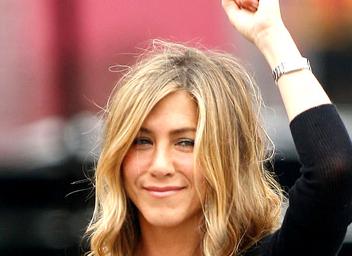 Aniston, 40, is said to be convinced that her “hot”, new relationship with Butler is the key to rekindling her romance with Pitt, who she divorced in 2005 after five years of marriage.

Obviously, Brad would have to leave partner Angelina Jolie, with whom he raises six children.

“Jennifer is convinced Gerard is the key to getting her back with Brad,” a source told the National Enquirer. “And better still, she knows that Brad is so desperate to reunite with her that Angelina is devastated.

“At last, after years of hurt, Jen can finally sense victory. She thinks Brad is like putty in the palm of her hands and that Angie is finally down for the count.”

“Jen romping with so publicly with Butler is like stabbing a knife through Brad’s heart,” the source continues.

“Instead of brooding for weeks over her failed romance with Bradley Cooper, like she’s done in the past, Jen seems in total control of her life. And nothing says that louder than her recent romps with sexy Gerard.

“Pictures of her and Butler out on the town have surely left Brad in the doldrums. And making her revenge even sweeter is the knowledge that Brad’s relationship with Angie is said to be literally in the pits lately.

“How good that must feel for Jen to know that she’s enjoying herself while at the same time hurting her arch-rival, who’s said she wants to try again with Brad.”

Believing any of this crap? The Enquirer really is scraping the barrel with this one.

A source onset of The Bounty says that Jennifer is all smiles when Gerard’s around — and she’s grumpy when he isn’t.

“Jen is always smiling and happy when Gerard is around,” said the insider. “In fact, the only time she’s been grumpy at work was on July 11 — when he wasn’t there!

“She wanted to be left alone and didn’t want anyone near her. It was totally different from how she’d been acting all week, when Gerard was on set.

“By being so public about her feelings for Gerard, Jen is giving the finger to all recent lovers, including John Mayer. But what means most to Jen right now is showing Brad that she’s doing just fine without him — even though she may secretly yearn to have him back in her life.

“And she flaunts Butler in public, even while knowing that there is little chance of it going anywhere because he’s not the marrying type.

“It’s important for Jen to send a strong message to Brad that if he really wants her back, he’ll have to get down on his knees and beg.

“It’s a big gamble, but she’s obviously prepared to take it!”

Meanwhile, between takes yesterday on the New York City set of her currently shooting film The Bounty, Jennifer Aniston is dwarfed by the huge green bowl she’s snacking from as she walks to and from her trailer. The actress also took some personal time while not shooting to spend with one of her dogs.

It stands to be another big year for Jen. In addition to The Bounty, her next film, Love Happens with Aaron Eckhart, is set to hit theaters in September, followed by The Baster in early 2010.