Jennifer Aniston and Vince Vaughn are really good at dodging the paparazzi when they were together. But there are two separate reports claimed that the pair is gearing up for a rematch in the romance department. 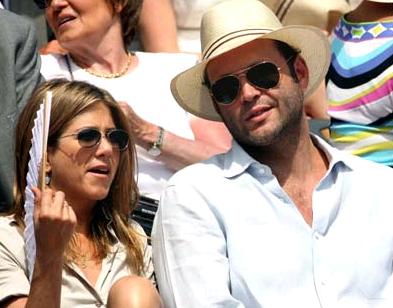 Are they really back together? According to the witness for the meeting of the “Break-up” couple, Jennifer Aniston was “Dressed down in a simple black shirt, blue jeans and minimal makeup (when she) arrived at the Terrace Café of West Hollywood’s Sunset Tower Hotel with a woman and two men in tow. To diners at the poolside restaurant, it looked like Jen was about to enjoy a night out with a group of her pals – that is, until ex-boyfriend, Vince Vaughn, showed up and joined them.”

According to the report, initially Jennifer Aniston kept her distance. A fellow diner revealed that she seemed reluctant to attract attention to the fact that they were both at the same table, saying, “She was obviously thrilled to see him. She giggled quietly at his jokes. She suddenly darted around the table, sat in his lap, and gave him a big kiss.”

After enjoying dinner together, the pair went off into the night. The eyewitness revealed, “Jen’s friends left and she climbed into the car with him.” The eyewitness added, “Jen was smiling and waving” as the couple drove off together.

Another report indicates, “They’re back on. The Breakup stars, Jennifer Aniston and Vince Vaughn are secretly back together and the Enquirer has uncovered all the details about their hush-hush dates.”

An insider revealed, “Jen and Vince have quietly started seeing each other again, and she’s never been happier. The on-again lovers have since kept a low profile, to avoid the intense scrutiny that surrounded their initial 15-month romance. In mid-October, they were caught laughing and chatting excitedly during a secret date at the Beverly Hills Hotel Bar Nineteen 12.”

A friend of the couple revealed, “Then, at an earlier November dinner, also at the Terrace Café, they “sat close together holding hands, while deep in private discussion. The friend added, “At times, Vince reached up and tenderly touched Jennifer’s face with his hand. She was beaming.”