It appeared that Christmas came early for David Letterman on Thursday night after Jennifer Aniston stopped by Late Show to pay a visit and gave him a very special gift – the necktie from her sexy GQ cover photo. 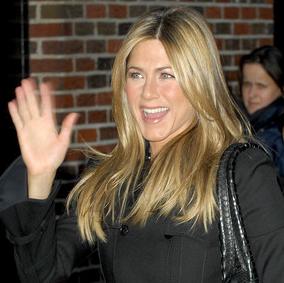 Jennifer Aniston, who visited the show to promote her new film “Marley & Me,” revealed: “It’s an early Christmas gift.”

Quite obviously happy to be receiving the tie – the only piece of clothing Jen wears on the GQ cover –Dave quickly ripped off his necktie and tossed it away. As the band played some classic burlesque-style tunes, Jennifer Aniston aided the talk show legend in getting the tie around his neck.

She laughed: “I’m dressing Dave! That’s a historic moment in my career!”

During the show she talked about her dog Norman and her boyfriend John Mayer. The only two creatures in the world luckier than Letterman.