Jennifer Ellison shows off her assets as she hit the cover of January issue of “Nuts” magazine. 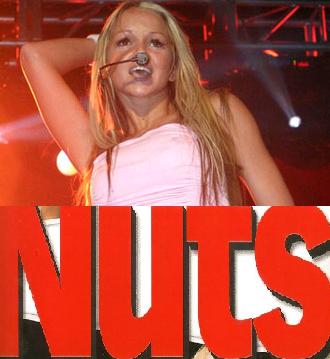 British glamor model graced the “Nuts” with the catchy lines: “Jennifer Ellison: Sizzling New Shoots,” which you could see here.

The 24-year-old Ultimo lingerie model is hoping to get her singing career back on track after a run in the West End production of “Chicago”. She had a hit in the UK in 2003 with “Baby I Don’t Care.”

On getting [email protected], she said, “Only if it was a Hollywood blockbuster and it was absolutely necessary. I couldn’t go [email protected] in a photo shoot because my nan wouldn’t be able to put it in her scrapbook. But I’d be well up for running about in a bikini for Baywatch. I doubt they’d ask me, though.”

On having a boob job, she revealed, “According to the papers I’ve had my boobs and lips done and had extensions put in my hair. What are they trying to turn me into – Jordan? The problem is, I’ve grown up on screen and after I stopped dancing I put weight on all over. What can I say? I’m a big-chested girl, I’ve got curves, hips and a waist – and it’s all mine!”