Swooping through the night sky on a magic carpet with husband Marc Anthony, Jennifer Lopez could be filming an extravagant new music video. 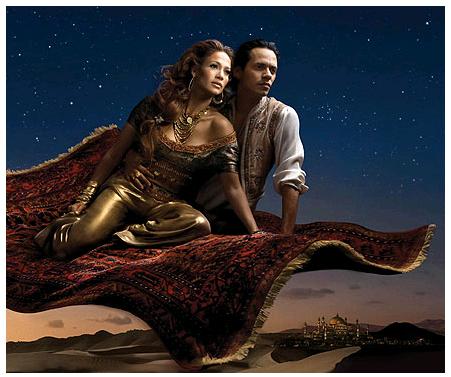 In a scene inspired by popular fairytale “Aladdin”, the couple was snapped floating above an Arabian landscape of sand dunes and opulent palaces. Another shot shows a gold-clad Whoopi Goldberg, in character as the tale’s genie, taking hold of the corner of the carpet and clearly bent on mischief.

The photos, by renowned American snapper Annie Leibovitz, are from a series taken to mark Disney’s “Year Of A Million Dreams”, a scheme in which a million prizes will de given away across the Disney franchise.

Brazilian bombshell Gisele Bundchen features in another photo as Wendy Darling in a scene from “Peter Pan”. Dressed in a flowing white nightgown, the model stands transfixed by the sudden appearance at the window of the boy who never grows up, depicted by ballet star Mikhail Baryshnikov. At his side is actress Tina Fey, as Peter’s fairy pal Tinkerbell.

Also taking on a Disney role for the occasion is Jessica Biel, who appears in the fantasy photograph series with her hair swept off her face and wearing a traditional Native American costume for her role as Pocahontas.