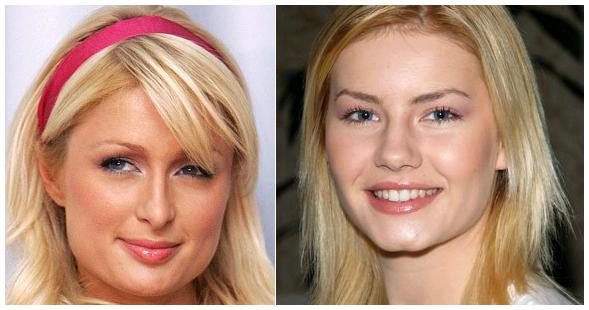 The hotel heiress and the “24” star brazenly made out on the dance floor in front of fellow clubbers at New York’s trendy Tenjune club.

One onlooker revealed, “They were drinking and dancing, and all of suddenly they just started kissing. They were all over each other and making out for about a minute. That’s Paris – she loves putting on a show.”

Despite multiple witnesses, 25-year-old Elisha’s representative has denied the story.

Paris and Elisha have been good friends since they co-starred in ‘House of Wax’. Elisha began partying with Paris after splitting from ice-hockey player Sean Avery last August.

The 26-year-old socialite attended the launch party for the latest series of ‘The L Word’ – a US TV show about the lesbian scene in Los Angeles – where she was scene looking cosy with they show’s star Katherine Moennig.

Courtenay was Lindsay Lohan’s roommate until their recent falling out. The pair attended a party for “power lesbians” in Los Angeles in December.

Meanwhile, Paris has spoken of her joy at meeting baby Harlow, the daughter of her best friend Nicole Richie and Good Charlotte frontman Joel Madden.

The “Simple Life” star revealed, “She looks like a miniature version of Nicole and Joel. We had a sleepover on Sunday night at Nicole’s mom’s house. I was crying when I saw her. I am so happy for them.”