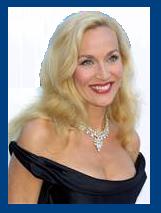 Jerry Hall, the former wife of the Rolling Stone Mick Jagger, has revealed that her four children suffer from dyslexia. She said Elizabeth, 23-year-old model, James 21, Georgia May, 15, and Gabriel, 19, all have the condition. She thinks having dyslexia, which causes learning difficulties, was a “gift” when she said, “It’s like a gift because it makes you think differently.”

Her comments come after the Duchess of York, Sarah Ferguson revealed that her daughter, Princess Beatrice, suffers from dyslexia and struggles to read.

Jerry Hall, 50, who has herself been diagnosed with dyslexia, said of her own children: “They all take after me.” She described, “Being dyslexic is difficult at the very beginning but as you get older you learn to cope with it and I think it’s great.”

Jerry Hall spends two hours every day driving her youngest son Gabriel to a school that helps dyslexic children. She revealed, “It’s a slog but worth it, and it really helps him when I read to him.”

Jerry Hall also revealed, “I love family life and my children are the greatest gift life has given me.” She added: “Maybe I’m going to be one of those mothers who still has all the children living at home with her in their 30’s. I’d like it but I think James is planning to move into his own flat pretty soon. Guys need their space. It’s the chick factor.”