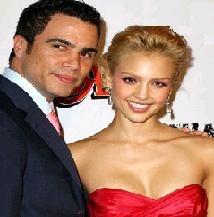 The “Fantastic Four” actress leaves the romantic city after spending over a week there. The couple arrived at Paris for the wedding weekend of Desperate Housewives star Eva Longoria and Basketball star Tony Parker.

Jessica Alba has also seen doing a shopping spree with friends in Paris. She has also been spending time in France lately to promote the new “Fantastic Four” film and appear at fashion shows, aside from attending Eva Longoria’s wedding.