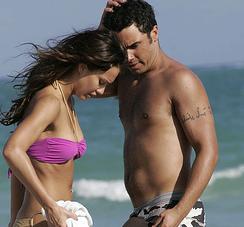 The “Fantastic Four” actress and the producer were pictured taking a romantic stroll along Pacific Palisades beach in California on Wednesday.

A source revealed, “They were hugging and looked very happy together.”

The 26-year-old actress met Cash Warren on “Fantastic Four” set in 2005, in which Jessica Alba starred and Cash Warren worked as a director’s assistant.

Cash Warren was named the ‘Luckiest B*****d’ of 2007 by Spike TV just before their brief split last month.

The actress apparently dumped Cash after getting tired waiting for him to propose.