Jessica Alba has hit the front cover of Elle magazine, as she was a cover girl for its February 2008 issue. 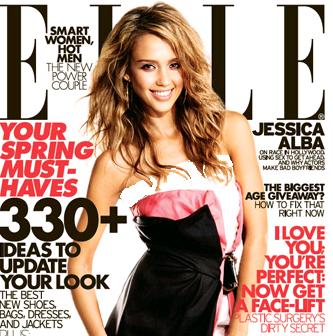 The “Fantastic Four” actress, who was recently confirmed engaged and pregnant, has graced the Elle’s cover with catchy lines “Back In Hollywood… Why Actors Make Bad Boyfriends.” You could see some of her pictures here and here. Other pictures are here as well as here.

On meeting Zac Efron, she answered, “He looks like a child with a lot of makeup. I was like, ‘My God, you’re just a little kid.’”

On turning 27 in April, she replied, “I’m anticipating it. I’m feeling old, yes…27 was when Janis Joplin, Jimi Hendrix, Kurt Cobain, and Jim Morrison all died.”

On being more of a CEO than a sex kitten, she added, “I think there are ambitious girls who will do anything to be famous, and they think men in this business are used to women doing that. Contrary to how people may feel, I’ve never used my sexuality. That’s not part of it for me. When I’m in a meeting, I want to tell you why I’m an asset, how I’m a commodity, how I can put asses in the seats, not, ‘There’s a chance you’re going to be able to f*ck me.’ That’s never been my deal.”