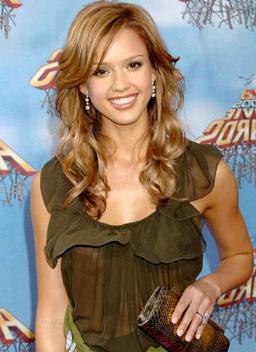 The 26-year-old actress revealed, “I went to a spa and it was so traumatic because no one was wearing a suit in the Jacuzzi. It was gross! I’m not sitting with a bunch of people with their business hanging out!”

The stunning actress insisted she always keeps her curvaceous figure covered up because she doesn’t like being leered at, saying. “I don’t put it out there. I stay away from super-high heels, super-short skirts, revealing tops. I know what kind of attention you get from that and it’s not the kind I want.”

Jessica Alba is back with her film producer boyfriend Cash Warren after a brief split. She admits her Hollywood career can make relationships difficult.

She added, “I’m not the easiest person to hang with all the time. I’m away a lot and it’s an unconventional life.”