Jessica Alba has taken to her Celebrity MySpace blog to defend herself over accusations made by Bill O’Reilly and TMZ site that she is dumb. 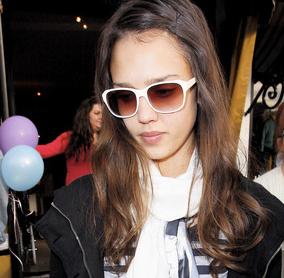 When a reporter approached her at an inauguration event last week, she tried to turn the tables on him by asking him what Barack Obama’s greatest characteristic was. When the reporter said he felt uncomfortable answering because he is a journalist, Alba replied, “be neutral – be Sweden about it.”

TMZ site later called her a “ditz” and an “arrogant buffoon” for saying Sweden instead of Switzerland when referring to the neutral country during WWII.

O’Reilly also called her “misguided” for mixing up the countries.

But on her blog, Alba writes, “I find it depressing that, in the midst of perhaps the most salient time in our country’s history, individuals are taking it upon themselves to encourage negativity and stupidity.

“Last week, Mr. Bill O’Reilly and some really classy sites (i.e. TMZ) insinuated I was dumb by claiming Sweden was a neutral country.

“I appreciate the fact that he is a news anchor and that gossip sites are inundated with intelligent reporting, but seriously people… it’s so sad to me that you think the only neutral country during WWII was Switzerland.”

She then linked to a wikipedia article to prove Sweden was also a neutral country.

Added Alba, “I appreciate the name calling and the accurate reporting. Keep it up!!”

TMZ site shot back in a blog post Tuesday afternoon: “She is absolutely correct. Sweden was a neutral country … 60 years ago. We apologize for not considering the political climate of the world in 1942 when we suggested she may have meant, ‘Be Switzerland’ — a country that is currently neutral.”

Before signing off, she posted a video of her trip to the inauguration.