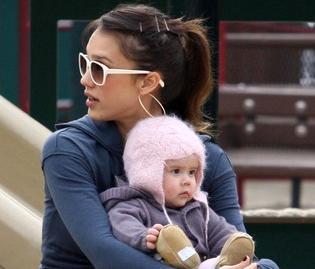 Honor Marie, who is nearly 7-month-old snugly clad baby, appeared delighted to be standing on her own two feet even as her proud and very sexy mom steadied and secured her.

The actress, who recently caused a flutter with her hot and steamy photos in the 2009 Campari calendar, is all set to guest star in an hour long episode of The Office that will air on February 1 on NBC, following the Super Bowl.

Her upcoming films include “An Invisible Sign of My Own” (Filming), “The Killer Inside Me” (Pre-production) and “Sin City 2” (Treatment/Outline).