Jessica Alba expressed that she is proud of her skin color is brown as she revealed that she can’t wait for her baby to be brown. 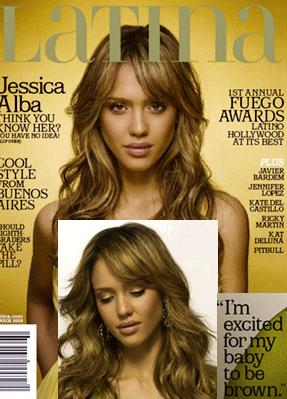 The actress, who was encountered rumors last year after saying that she considers herself American and not Latina, landed the front cover of Latina magazine for 2008 March issue.

The highlights of her interview with the magazine:

On her reluctance to walk the red carpet at Latin events, she said, “I’ll support those shows, but I can’t go on the press lines and have people make me feel bad about myself. Life is too short. I can’t change how I grew up, and I shouldn’t have to apologize for it. I know I feel close to the Latin community, because that’s what I grew up with.”

On claims that she’s proud to have cut loose from her Mexican roots, she revealed, “I never said that. Cut loose from what? What the hell are they talking about? Why would I want to cut loose from the only family I know?”

On not learning to speak Spanish as a child, she replied, “I wish to God that my dad spoke Spanish to my brother and me, but he didn’t grow up with it.”

On confusing other men for her dad as a kid, she explained, “When I was little, I used to go up to black men and hold their legs, thinking it was my dad all the time. I’d wrap my arms around them, then look up and be like, ‘Oh my God!'”

On being accepted for who she is in Hollywood, she answered, “I was always trying to figure out: How the hell am I going to be mainstream? How are people going to accept me? When are the going to get a clue that I am American, that this is what America looks like–people like me who are mixed, have different blood, mixed with different ethnicities? When are the people who are hiring for these jobs and writing these screenplays going to realize that?”

On what she wants her baby to look like, she added, “I’m excited for my baby to be brown. I just have to believe the dark gene is going to survive. Cash and I are like, please!”

Jessica Alba, who is also the new face of Revlon, cleared after she bragged about her low-maintenance lifestyle, saying, “I’m not a make-up and hair kind of girl. I don’t really have a brush.”