Jessica Alba, who is a natural brunette, dyed her hair blonde for hit films “Fantastic Four” and “Sin City” and immediately noticed how much more attention she attracted. 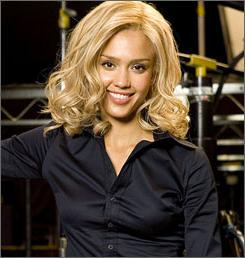 The actress revealed, “People pay attention to blondes far more than they do to brunettes. I definitely got checked out three times for every once I do with my regular hair color.”

The 26-year-old star doesn’t like men drooling over her or playing sexual roles. She revealed, “A lot of young women push to be tarts more than maternal figures. My character in ‘Fantastic Four,’ Sue Storm, is young but she takes care of the boys and keeps her family together. I also like that she’s intelligent.

The star added, “A lot of comic book women are damsels in distress or evil rather than heroes, and they’re usually sexed up. Being objectified like that is not something I’ll ever get used to. It’s fun to play the role, and I know that it’s pure fantasy, but I still get anxious.”