Jessica Alba has given an interview to the March ELLE in which she talks about childbirth, her figure and her exotic looks. 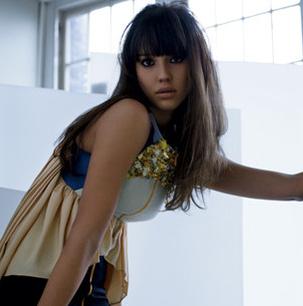 The “Fantastic Four” actress gave birth to daughter Honor Marie Warren last June. In the below photo from the magazine, she is posing with designer Joseph Altazurra.

On giving birth: “Contractions aren’t that bad. If you’ve ever had bad cramps? That’s what they’re like. But that moment when they put the baby on your chest – that’s deep. It’s a deep experience.”

On snapping back into shape so quickly after giving birth: “I did it for the Campari job. [The workouts] were horrible. I cried. And I haven’t worked out since.”

Her secret to looking slim after giving birth: “I wore a girdle. Eight weeks after my girlfriend had her baby, you could see her six-pack. She told me to put an elastic band around my waist – any kind of band or girdle works. She was like, “I slept in it.” I didn’t recover as fast as she did. I don’t have a six-pack – that’s just not my body at all.”

On separation anxiety: “This is the first time I’ve been away from her. It’s been six days. It sucks; it’s the worst thing ever. But we Skype, so I can see her on video. The worst is when you can see her little chubby hands grab the screen, and I’m not there. [She pauses, her eyes welling up, then laughs as she wipes the tears away.] That’s a new thing – I never cried before. Just being a mother is making me a big, weepy mess.”

On fashion: “I’ve always loved beautiful clothes, but I’m not very hip to the coolest, newest, most fashionable thing. I’ve always liked mixing casual things with nice, beautiful pieces – mixing masculine and feminine. I just didn’t always know how to do it. As a kid, I bought random, thrift store stuff and hoped that it worked. Sometimes it didn’t.”

On her husband having a say in what she wears: “Whether I’m dressed as a boy or wearing a gown, he’s pretty cool about it all. He doesn’t want to change me. He’s always like, “Okay, whatever makes you happy.”

On having an exotic look: “Anyone who’s part of pop culture is going to be sensationalized and spun into something, some one-liner. Also, there aren’t many other stars, besides Halle Berry and Jennifer Lopez, who most people in the world can related to. We look like people of the world – I can kind of mix in with girls in Asia, South America, Europe.”