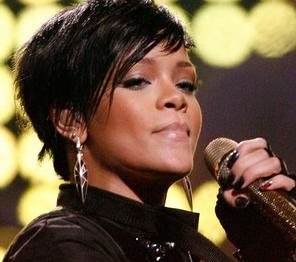 But off-stage, it’s a different story: the Barbados-born beauty is a clingy girlfriend who can’t bear to let boyfriend Chris Brown out of her sight.

A source, who is close to Rihanna, revealed: “She has to have Chris around her 24/7. If Chris is with her on a photo shoot and steps away for a second, she starts saying, ‘Where did he go?’”

For her part, the Umbrella singer admits that being apart from her loved ones is difficult, saying: “My biggest challenge is being away from my family and friends, and all the people I love and I’m used to being around. It’s hard for me to just throw that all away and be by myself.”

The source agrees, adding: “If Chris isn’t with her, she wants to call and check in every second. She’s crazy about him. Rihanna constantly talks about Chris.”

So no doubt the 19-year-old Kiss, Kiss singer’s phone was ringing off the hook after he was photographed on Jan. 31 being mobbed by scantily-clad girls at Twenty One Club in Dublin, Ireland, during the last leg of his European tour!